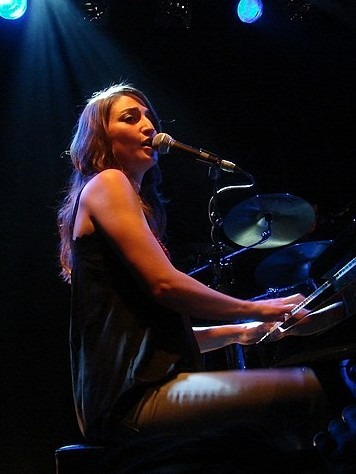 Known for her powerful vocals and versatile music production, Sara Bareilles is an American songwriter and a producer who popped into the scene in the early 2000s. Recognized as one of the most under-rated artists, Sara Bareilles during her short-lived career was able to achieve several awards, accolades, and even comparisons to artists like Regina Spektor, Fiona Apple, and Ingrid Michaelson. In total, Sara Bareilles released only three albums that were well-received by both critics and fans.

Her first album ‘Little Voice’ went platinum, followed by ‘Kaleidoscope Heat’, which was released in 2010 and successfully managed to top several charts. Sara’s mesmerizing song-writing ability helped her music link with the fans. Using her experience and adding a touch of motivation made her one of the few artists that could pull-off several talents at once. Therefore, with so much to her name, it is only better that we discover Sara Bareilles and recall some of the biggest moments of her time. Let’s begin. Back when Sara Bareilles had performed in the annual concert held by UCLA Spring Sing, she was just a star waiting for her big moment. By this time, she had already won the competition twice. Then, Bareilles began singing and performing at local clubs and bars, in an effort to build a moderate following before she received the chance to perform in large venues. In 2003, she released two demos of live tracks mostly, ‘The First One’ was released in April, whereas the second ‘The Summer Sessions’ was released in October.

Then at the beginning of the next year, Bareilles released her debut studio album ‘Careful Confessions’. With the release of her album, Bareilles was now appearing at different events and venues. For instance, she opened for Rocco DeLuca and the Burden and in 2004, the singer was observed performing the song ‘Undertow’ in the film ‘Girl Play’ as a bar singer as well.

Soon, Sara Bareilles joined hands with Epic Records on April 15, 2005, as she signed a contract with them. Bareilles then spent the rest of the year 2006, composing, writing, and working on songs that would feature on her upcoming album.

Sara Bareilles was opening for several shows at the time as well for the big names in the industry. In 2007 alone, she had opened for Paul Nutini and Maroon 5. Then it was British sensation James Blunt who called on Sara to open his U.S tour as well. In June 2007, iTunes offered ‘Love Song’ by Sara Bareilles as a free download for the entire week. The following month, Bareilles released her debut studio album ‘Little Voice’, which climbed at the no.1 spot of the most downloaded music albums of the music store. Upon its release, the album stood at No.45 on the Billboard 200 chart. Then, the popular single ‘Love Song’ appeared in Rhapsody commercial, from there it started to climb and gained its pace.

As a result, the song climbed from No.73 to No.16 in just one week. Then on December 27, 2007, the song had entered the top 10 on the Billboard Hot 100. Furthermore, Sara Bareilles performed ‘Love Song’ on ‘The Tonight Show with Jay Leno’ and on ‘The Today Show’ in 2008 as well. It was not long until the song entered the UK Singles Chart and peaked at the no.4 spot.

Nearly 3 years later, the album was certified platinum by RIAA. The album had managed to peak at the No.7 spot in the Billboard 200 while climbing the No.9 spot at the UK Top 40. However, this was not it. ‘Love Song’ itself was later certified triple platinum by the association.

In October 2008, Sara Bareilles released ‘Between the Lines: Sara Bareilles Live at the Fillmore’ on both DVD and CD. Following the release, Sara continued touring and yet again appeared on the ‘Tonight Show with Jay Leno’. In the spring of 2009, Sara was on another tour titled ‘Gravity’ to promote her single ‘Gravity’ from her album ‘Little Voice’. In addition to that, Sara would perform at multiple college shows in April and May. While some were meant for college students only, the rest were open to the public.

Kaleidoscope Heart and The Sing-Off Following her previous hits, Sara Bareilles now started to work on another studio album with the likes of Weezer, Pharell Williams, and Ahmir “Questlove” Thompson. Soon, the songs were near completion and Neal Avron was asked to take over the recording, production, and mixing processes of the entire album. The album was titled ‘Kaleidoscope Heart’. ‘King of Anything’ was the first single off the album and was released for radio play in the U.S in May 2010.

Then in June, it was available for sale. It wouldn’t be long until it was certified platinum by the RIAA. On September 7, 2010, ‘Kaleidoscope’ was released and debuted at the no.1 spot in the United States by selling 90,000 copies in the first week alone. At the same time, her previous album ‘Little Voice’ made an entrance into the charts again.

Sara’s strong mezzo-soprano vocal range made her rank alongside singers like Fiona Apple, Regina Spektor, and Billy Joel. Most people were of the view that Sara was just a singer until she started incorporating piano in her music. Critics described her as someone who features the ability to understand complex relationships and put it into words using her powerful song-writing ability.

Concluding, it could be said that Sara Bareilles was an ahead of her time type artist. This was a time when originality and raw talent was valued rather than auto-tunes and other artificial music modification techniques. Since Sara had her personal experiences to describe, she knew which cord to strike with what song. Therefore, the same talent which helped introduce Sara Bareilles back in the day, helped us discover Sara Bareilles today as well.