Basketball, one of the favorite sports of Americans, is a game between two teams with five players each who have to throw the ball in a basket 10 feet high. Being a sport played all over the world, Basketball has become quite popular and many associations such as the National Basketball Association (NBA). But basketball hasn’t always been like this. The sport has evolved in various ways over the past few years.

Naismith Invents Basketball as a Game

It all started in 1891 when James Naismith, a Canadian physical coach, invented the concept of basketball. Due to the rainy day, there weren’t many games that could be played outside so Naismith came up with the idea of basketball randomly. He wrote the basic rules himself and set up a basket on an elevation. The game required teammates to pass the ball to each other and then toss it into the basket.

However, since the basket was put on an elevation, getting the ball back once it was tossed in became difficult. Therefore, Naismith removed the bottom of the basket which allowed the ball to come out after each basket. This was quite similar to what we see today in modern basketball equipment. 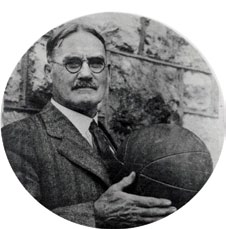 How the Game Got its Name?

What we know as basketball today could have been named Naismith Ball which would not have made much sense. It was Frank Mahan, one of the earliest players of the game, who suggested the inventor give his game a specific name while suggesting it as Naismith Ball. However, later he suggested the name to be basketball for the fact that the two important elements of this game were a basket and a ball. In 1892, the game was played with its official name as basketball in Albany, New York which consisted of nine players.

Modern basketballs are made out of inflatable rubber bladders and have been wrapped in multiple layers of fiber too. The top of the basketball is either made of leather, rubber, or synthetic composite nowadays. However, when the game was invented, soccer balls were used. The soccer ball was a fine alternative until it was found that due to the sewing of these balls, the laces were causing the dribbling to be unpredictable. The ball was swinging more which made the bounces quite ineffective.

To avoid this problem, a lace-free ball was invented which was endorsed by James Naismith. Despite the fact that there was variation in the size and shape quite often, it was something that could be specifically related to basketball only. This was considered as the first official ball to be used for the game because earlier, it was only a soccer ball with no difference. This basketball was brown but in the 1950s, the color was changed to orange because the brown ball was not much visible to the players while orange appeared as a much brighter color. Find out more about the modern equipment used in Basketball over here – Equipment You Need to Play Basketball.

By 1942, the factory modeled balls were being produced for the sport but even then, there seemed to be a certain problem with the grip. The four-panel basketballs were a bit difficult to control. Making tactical maneuvers during the game was challenging and the players insisted on improving the design as well. Until 1970, the four-panel basketballs were used and after that, the newer design came out which had eight panels.

The National Basketball Association of America considered that the eight-panel basketballs were better for improved grip and control. However, the changes were further seen in 1983 when the NBA announced that they will now use a full-grain leather basketball. This basketball had a better bounce and improved control for the players.

Nonetheless, the ball was something that the NBA always planned on improving. Therefore, after 2006, the full-grain leather ball was also taken back from the official games and instead, the NBA introduced microfiber composite Spalding Cross Traxxion Ball. Instead of having the 8 panels, the new ball had two cross-shaped panels. With microfiber material and better design, the basketball now had the perfect grip and consistency for the domestic, national, and international basketball games.

Until 1906, peach baskets were used. The design was similar to the one introduced by Jame Naismith but the hold in which the ball passed was quite big. As a result, the game was not challenging enough for the players. Moreover, the peach baskets were installed on the mezzanine floor’s balcony as the concept of poles was not common during this time.

However, this was a big problem because, on many occasions, the residents or viewers on the mezzanine floor would interrupt the play and shots. Some would throw items while others would simply catch the ball and not let it go to the basket. All these problems indicated that an independent system for basketball needed to be set up so that no outsider could interfere in any way.

Another technique that was tried by the enthusiasts was to have a ladder, then a pole, and finally a chain on the bottom of the net which was used to retrieve the ball. However, the ladders were often unstable.

Therefore, during 1906, the peach baskets were replaced and metal hoops were installed with a backboard on a long pole. The circular hoop had a smaller diameter so that the game got interesting. Gradually, basketball was becoming a sport that was getting the attention of many locals. According to the inventory, James Naismith, he was highly nervous about the game that he invented because many who tried doing so before him failed miserably.

Find out more about some of the coolest winter sports in the world – Best Winter Sports around the World.

When the game was first invented, it was limited to the gym where it was played first as James Naismith came up with the idea. However, soon after the game got popular, standard rules specifically regarding the court were required. In 1903, it was ruled out that straight boundaries were to be set for the game so that the concept of foul play could also be there. The first official rules for Basketball emerged during 1924 when it was suggested that the court dimension would be 90 by 50 feet at maximum and 60 by 3 feet at minimum. There was no 3-pointer line during these games.

Soon after the NBA was formed, they widened the area for the court extending from the free-throw line to the basket at 12 feet. More players could be playing the game while the added advantage for tall players was also reduced to an extent. The three-pointer line was introduced to the court in 1979 which was 22 feet from the corners and 23 feet 9 inches from the top. Currently, the NBA has further expanded the no-charge zone. The International Basketball Federation also moderates the gameplay, the court rules, dimensions, and other aspects regarding basketball frequently. Just like the other aspects of basketball, the uniform evolved too. Back in the early 1900s, players were supposed to wear one of the three uniforms. This included

This was not ideal because it gave a lot of choice to the players and many different types of designs were seen in the basketball courts. The uniform was essential only in national-level games and not casually.

However, what was more important was the shoe style. Early games were played with canvas shoes that came with rubber soles. These shoes were relatively heavier but performed better grip and support on the court. Chuck Taylor, an American basketball player, had his basketball shoes introduced in 1921 which were quite famous until the 1960s. These shoes were a bit light and provided a better level of comfort.

By the 1960s, the concept of leather shoes was becoming so popular that they were also considered for basketball. Nike was among the first few companies that released basketball shoes in 1972. By 1980, leather shoes had dominated the market while Nike also had extensive levels of research and development which allowed it to make better kinds of sports shoes including air technology. Nike Air Force 1 was the first one with Air Soles which got introduced in 1983.

Air Jordan I and Air Jordan II were later created and were inspired by Micheal Jordan, one of the top basketball players of all times. Soon afterward, Nike also released the Air Jordan III, the shoe that had a visible air unit on the heel. Seeing the success and rise in the popularity of basketball, many other companies including Reebok crafted their own shoes.

Basketball is surely a great activity to stay up with your friends from the hood. The sport has evolved in numerous ways over the past few years including the rules, equipment, balls, and other aspects. With many famous players and teams for the sport, we expect baseball to be further developed and promoted to other states in the future.